This e-mail was sent out yesterday to Farm Bureau members in Washington State, where Governor Christine Gregoire — who won her seat by 133 votes after several recounts in 2004 (and if that story doesn’t send you straight out to the polls, you are beyond hope) — is once again being challenged by the craptastic shill-for-the-developers Dino Rossi. According to the source that forwarded it to me, it’s since gone totally viral in the ag community.

YAKIMA, WA – Over 100 Farm Bureau members braved strong winds and heavy rains to hold a rally in Yakima on November 1st to protest against Governor Christine Gregoire and her lack of support and action in building water reservoirs in Eastern Washington during her first term in office.

In particular, the Farm Bureau members at the rally expressed strong dissatisfaction at Governor Gregoire for her lack of leadership on several issues, including:

1) Not providing leadership in pushing for critical water reservoir projects in Eastern Washington such as in Yakima (Black Rock) and in the Columbia Basin (Odessa Aquifer).

2) Not pushing the legislature to find funding to build large water reservoirs in Yakima and Odessa.

3) Allowing the Tribes and Environmental Groups to have too much power in controlling Ecology’s decision-making process regarding permitting and building reservoirs.

4) Not reigning-in the Department of Ecology for setting up overly bureaucratic approval processes that have caused the permitting and approval of reservoirs in Washington to take 20 or 30 years.

During the rally, the Farm Bureau members chanted “Jay Manning must go!” in reference to Department of Ecology Director Jay Manning.

Nearly all of the farmers at the rally indicated that they would now be supporting Gubernatorial Candidate Dino Rossi because of the lack of action that Governor Gregoire and Ecology Director Jay Manning have shown in regards to building water reservoirs in Eastern Washington.

For more information about the rally, please call Rick Jones at 509-575-9901 <farmbureaumembersforwaterstorage@aol.com>

What’s interesting about this is that:

There were no farmers.

There was no chanting.

In fact, there was no protest against Gregoire in Yakima at all. Our sources called the Farm Bureau directly to confirm this fact.

Also: if you call “Rick Jones,” you’ll find yourself talking to whoever picks up the pay phone at the Tin Rhino Tavern in Yakima.

<farmbureaumembersforwaterstorage@aol.com>And the bogosity went even further. The email also included these “photos of the rally:” 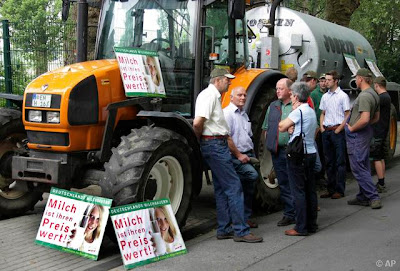 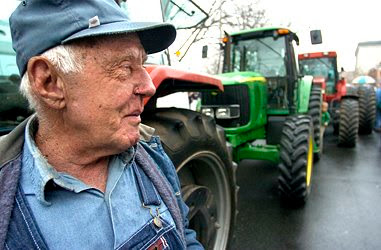 The top one was cropped in the original e-mail so that you couldn’t see the signs — which are in German, because they were taken at a milk price protest in Germany.

The second is a cropped photo from a farm rally in New Jersey.
<farmbureaumembersforwaterstorage@aol.com>
Now, we long ago since got completely inured to the fact that the right wing has elevated Making Shit Up to an art form. But at this point, if they tell you the sky is blue, you’d better look out the window just to make sure.