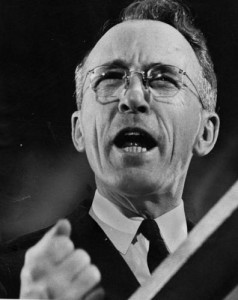 But progressive Americans living overseas aren’t waiting around any more for y’all to ask. Some of us are getting proactive about sending our stories home. All around the world, there are millions of American citizens who have first-hand experience with other countries’ health care systems. And Democrats Abroad, the world’s largest political gathering of expatriate Americans, is getting us organized to tell our tales.

In an effort launched by my friend Lauren Shannon, an old-line Deanic who heads up DA Japan, DA started compiling a collections of stories and resources from American expats back in April. (The Health Care for America website has some of their gleanings here.) This week, Democrats Abroad Canada — the largest of all the DA national chapters — started leaning oOne of the big differences between the 1993 Hillarycare debate and our current conversation is that we’re hearing a lot more fact and lot less fiction about how other countries’ systems actually work.

Thank the Internet. Back in 1993, the “Harry and Louise” ads succeeded because most Americans didn’t have access to any other sources of information. Now, the whole world is at our fingertips. Anybody who really wants to know how health care is managed in Canada, or the UK, or Japan, or Australia can readily find someone with real experience in those systems who can tell their stories.

But progressive Americans living overseas aren’t waiting around any more for y’all to ask. Some of us are getting proactive n its tens of thousands of members to ratchet up the pressure on the Congress folks and the newspapers back home.

(Procedural note: American expats register to vote in the last state they lived in before leaving the US. We can only vote for federal offices — Congress, Senate, and President — and thus our absentee votes don’t have any effect on state or local politics. But expat voters — many thousands of them, in some states — can provide a significant margin in presidential elections, and we can also give our members of Congress an international perspective they might not otherwise get.)

Here are DA Canada’s health care talking points — the story those of us who live north of the border really want our fellow Americans to understand about the Canadian health care system:

It’s less expensive: It’s well known that Canada spends less of its budget on health care than the U. S. does, but anti single-payer propaganda says that Canadians pay more taxes. What they leave out is the chunk of money Americans pay to their insurance companies. If you add that amount to taxes you would find that, in sum, Canadians pay less.

No bureaucracy gets between you and your doctor: Despite propaganda from U.S. insurance companies, the Canadian system does not force patients to go through the government to get to their doctor. In fact, it’s pretty old-fashioned: you choose a doctor and make an appointment, show your health insurance card, and that’s it. If your doctor thinks you need to see a specialist or get further tests, he/she does not have to consult an insurance bureaucrat. If your specialist thinks you need an operation, you get it – without a stack of forms to fill out.

It’s user-friendly: Unlike the U.S. system, you don’t have to fear that an illness will strike you or a loved one and lead you into bankruptcy. You don’t have to master the minutiae of co-pays and all of the methods the insurance companies use to outsmart their clients. Just that lack of stress is a health benefit in itself.

Employers: The pro-insurance propaganda says that most people get health care through their employers. What about the people who lose their jobs, or are afraid to quit and try something else? They live in fear. Also, it is often said that small businesses provide the largest percentage of jobs in America. Many simply cannot afford health care for their employees.

Proof that the Canadian system works: Since 1966, when national health care was voted in – strongly opposed by the Canadian Medical Association – it has been considered one of the most important benefits of living in Canada. “Don’t mess with health care” is a message that Canadian politicians have been getting for over 40 years. Any candidate for national office who wants a U.S.-style system would lose – no doubt about it. This is not to say that there’s no room for improvement – even in the best of systems, there’s room for refinement. And when a system is under-funded or mismanaged, it’s not going to work as well as it was meant to.

In the U.S., polls show that support for the public option is very high – and growing. When it comes to the most comprehensive and least expensive (for the national budget and the individual wallet) health care, you just can’t fool all of the people forever.

But don’t just take it from the expats. Foreign nationals working in America are weighing in, too. Over at HuffPo yesterday, another friend, Canadian-born Ian Walsh, shared his, um, visceral appreciation of his home country’s system:

In 1993, at the age of 25, I became very ill with ulcerative colitis. I was hospitalized, and put on very expensive drugs. About a week after being hospitalized, the nurse watching me called in my doctors on a Sunday because I was deteriorating so fast — pain killers were no longer having any effect (i.e., high doses of morphine were not working), I wouldn’t let anyone touch me, and I was becoming delirious. At about midnight, they wheeled me into the operating chamber and took out my large intestine. While they were digging around, they found out I had appendicitis, and they took that out too. It would have burst within 2 days, and in my weakened state, it would have killed me.

Unfortunately, one of the treatments for ulcerative colitis involves immune suppressing drugs. My immune system basically shut down, my liver almost shut down, and I spent almost another 3 months in the hospital, riddled with extremely painful and crippling infections and other problems. At one point I was on 9 drugs; one of them was an antibiotic so expensive that only a single doctor in the hospital could approve it. My gastroenterologist called the treatment the equivalent of “pouring gold dust into your veins.” I wasted away, my weight dropping below 90 lbs. I often joke that I was old young: I’ve used a walker, crutches and cane.

The ultimate point of my story is simple: I got the care I needed, when I needed it, and I never paid a single red cent.

Which is good, because I couldn’t have afforded to pay. I was young and had very little money. The kind of care I received, even back then, would have cost hundreds of thousands of dollars in the U.S.

If I had lived in the U.S., my parents would have faced a choice between paying for my incredibly expensive treatment or watching me die. They were both old and it would have wiped out their savings entirely and thrown them into bankruptcy. Frankly, I don’t know how they could have supported themselves. My life, at that cost, would have had too high a price. I wonder how many Americans have had to make that calculation.

But I survived, and neither I, nor my parents, was bankrupted. In similar circumstances I doubt all of those things would be true for an American 25-year-old trying to survive the same medical condition in America’s health care industry.

“Harry and Louise” were a fiction. So (largely) is the story of Shona Holmes, the GOP’s current poster girl for the alleged “failures” of Canadian health care. That’s all the conservatives have in this debate: made-up stories and the usual heaping helping of fearmongering.

What they haven’t counted on is the fact that neither they nor the insurance companies they shill for have even the barest shred of credibility with the American people. Both factions have proven, beyond argument, that they’re willing to sacrifice 22,000 American lives every year in the name of profit — and that this mini-genocide is now far more salient to most of us than anything they could possibly have to say.

And they also haven’t counted on the fact that the majority of Americans now have access to a global network of online acquaintances with whom they have far more reliably trustworthy relationships, and who will give them the straight story.

If you are reading this from inside the US, don’t take the propagandists’ word for it. Google up some people who’ve actually seen doctors in other countries, and ask them how it really works for them. And if you’re a fellow expat, take a minute right now and write a note to your congressman back home, a letter to the editor of your hometown paper, and an e-mail blast to all your friends and relatives. Tell your story — the good and the bad, the similarities and differences, the things you miss and the things you’re amazed by.

The best way to dispel the great choking cloud of mendacity issuing from the insurance lobby is to take this conversation global, and hear first-hand from the people who’ve been there, done that. There’s a big wide world of insight and experience out there — and tapping into that could very well make all the difference in whether or not the US finally gets health care that works.